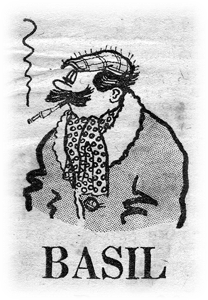 In the 1950's Roger owned a vintage Bentley and produced a strip cartoon of a Bentley character, Basil. It was syndicated to a number of newspapers, the Manchester Evening Chronicle, the Sunday Chronicle and the Sunday Empire News, all of which are no longer produced. During this time Roger presented a Basil Annual to W. O. Bentley the car's founder